Of the many artists I love – WOLF KAHN is way up there. Here are some of his thoughts: 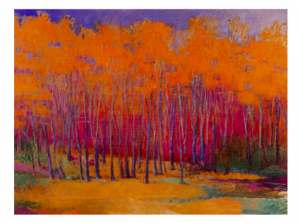 You don’t paint, he says, to express your religiousness or your patriotism. You paint to make a good painting. “I don’t want to have an agenda. I don’t even want to have a style—that happens by itself. The main thing I want is to be allowed to express my enthusiasm at the moment for whatever I’m doing. Aims, goals, programs and agendas are my enemies.”One of things Kahn says he might have absorbed from his teacher Hans Hofmann “was the feeling that your job as an artist was to create an unpredictable order. Hofmann used to quote Mondrian, who talked about the positioning of unequal but equivalent oppositions.” In works including Foliage in an Orange Setting (oil, 36×52), Kahn says, “I’m primarily thinking about creating a kind of density that’s believable and a volume that’s equalized.”

“I hate the whole idea of blending,” Kahn says as he starts to talk about Red Barns in Ruin (pastel, 13×171⁄2). “I have arguments with my wife, who wants to have two different kinds of fruit to make jam. I like one kind of fruit—I just want each thing to assert its own nature. It’s the same with color in a painting. I don’t like the idea of moving smoothly from one area to another. Contrast is really what I like.”“People don’t understand that colors have to be discovered; to know ahead of time the color of something is wrong,” says Kahn, who does many of his pastels, including In the Gloaming (pastel, 11×14), on location. “As I get older, I see colors as being more themselves than they have been earlier. That’s what gives me added power.”

When he talks about color, Kahn sounds as if he’s describing personalities. “Orange,” for instance, “is very blatant and vulgar. It makes you immediately start having feelings. I use it as sort of a device to get attention.” He quickly adds: “My own attention.” He starts rooting through the messy pile of paint tubes on his taboret, holding them up or squeezing them onto the palette and describing them with enthusiasm. “This color right here—radiant violet—turns me on regularly. I put it on the palette and right away something happens to me—I feel like working. And violet gray—I call it ‘Instant Vermont.’ You put that down and you have a sky. I know where I am once I have that color down,” he says.

How does he make all these brilliant colors work in a painting? “The only time I feel comfortable is when I don’t know why the colors work,” he says. The more he talks, the clearer it becomes that for him the act of painting is a conversation. You don’t control it; you respond to it. “It’s useful to think of a painting as a pet. If you have a pet, you give it food and it doesn’t overeat. Yet somehow if you haven’t given it enough, the pet will let you know it and you give it more so the pet is satisfied,” he says. “Painting isn’t really all that mysterious. You just give it enough till it’s satisfied.” Sounds easy, but Kahn acknowledges that sometimes a painting isn’t satisfied for years.“A painter has to cultivate an innocence of spirit,” Kahn says. “If you approach a painting with too much knowledge of or concern for the outcome, it’s likely that this will prevent discovery, which shows in your painting. As you work,” he says, “you have to be alert to what’s happening during the painting process, like how high and low are balanced in House on a Hill II (oil, 36×52).

And you can’t judge: “One always has to combat being goal-oriented. Somehow, you’ve got to have a sense of play—a sense that there are things happening when you paint other than your wishes and dreams at the moment. I’ve learned not to constantly be self-critical. I don’t really care whether a painting comes out one way or another.” Of course, he cares that the elements are balanced, that the questions are asked and that the problems are resolved. But, he says, quoting a Zen koan, “the best control is no control.”